The winners of the fourth edition of the Leaders in Hospitality Awards 2018 were announced at the St. Regis Dubai on Sunday, 29 April.

The event, organised by BNC Publishing for the fourth consecutive year, saw a record-number of winners, 25 in total, being named on stage in front of more than 300 guests from all sections of the hospitality industry.

It was a sign of the awards’ international appeal that people flew in from all over the world to be there. International winners on the night included Oman’s Anantara Al Jabal Al Akhdar Resort and Tariq Yousef, general manager of Intercontinential Riyadh.

Wissam Younane, CEO BNC Publishing, said: “Once again I am humbled to be associated with this fantastic industry. It is a real honour to see so many talented people assembled in one place to share their achievements with us.

“At BNC Publishing we endeavor to shine a light on the prowess of those within this amazing sector and that is what the awards were all about – taking the opportunity to give something back to those who give so much to us.” 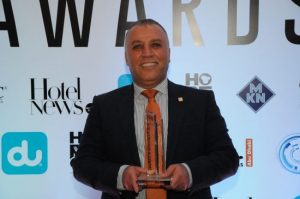