Crystalbrook Collection will open its newest hotel, Kingsley, towards the end of 2020.

Newcastle’s iconic circular ‘Roundhouse’, which currently houses the Council Administrative Centre, will be transformed into the city’s first five-star hotel, with Crystalbrook Collection announcing today it will open a new property in the Hunter harbour city at the end of 2020.

Initial surveys indicate a hotel development of 100 rooms will feature inside the property. Renderings from Barney Collins of EJE Architecture also show plans for a rooftop swimming pool, restaurant and recreation area.

To be named ‘Kingsley, a Crystalbrook Collection Hotel’, the moniker continues the company’s pattern of bestowing its properties with a gender-neutral name and individual personality. The title is an adaptation of Newcastle’s original name of Kingstown, which dates back to 1804.

Crystalbrook Collection is in the middle of an $800 million phase of expansion and investment covering six new hotels and resorts either operating or under construction. Having recently opened ‘Riley’ – its first resort in Cairns – Crystalbrook’s latest move doubles down on its recent entrance to the NSW market through the acquisition and re-brand of the Little Albion in the Sydney enclave of Surry Hills. 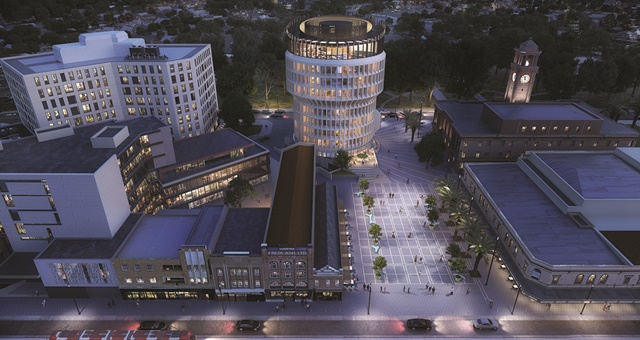 Kingsley is slated to offer at least 100 luxury rooms, a rooftop pool and restaurant.

“We think the location, with the City Hall, the Civic Theatre, the Art Gallery and the War Memorial Cultural Centre right on the doorstep, makes it a perfect location for a five-star hotel,” Crystalbrook Collection CEO Mark Davie said. He added the building had great potential and a strong identity and connection to the city of Newcastle and its residents.

Newcastle Lord Mayor Nuatali Nelmes praised the decision by Crystalbrook to invest and develop a five-star hotel in the city.

“I applaud Crystalbrook’s vision in re-imagining the CAC’s brutalist architecture. Reviewing their plans and renders, their vision for the building is an ideal adaptive reuse. In the space of less than two years, Newcastle will have a building that is both iconic and luxurious.”

Rights to develop the new hotel were won in a commercial tender recently issued by Newcastle Council.